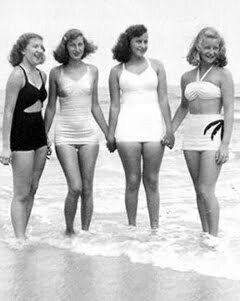 The swimsuits of the 1940s were somewhere between modesty and exposure. Fashion designers found that it is a pleasant thing to climb out of ordinary loose clothes, and there are a lot of ideas to transform the previously inconspicuous swimwear into ingenious frivolous swimwear.

By the 1940s, women were mildly comfortable showing midriffs and belly in their swimwear for starters. These were most often made up of rayon jersey, with or without blended with cotton linings. 1940s women’s fashion for swimwear was launched in two variations – one-piece swimwear and two-piece swimwear. 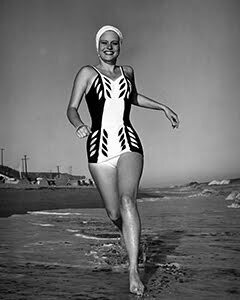 The one-piece swimwear that prevailed from previous decades was the regular hit amongst the fans. It was like a short, tight, and snug-fitting dress. Like a full-covering cups of the bra, the swimsuit went all the way to the thighs in a ‘swing skirt.’ Thin straps were consistent in one-piece swimsuits, tapering down to a bra-looking top with a V-neck. These were not too deep, mildly revealing the cleavage but most often were high.

The close-fitting bikini top accentuated the waist-line and hugged the hips in a triangular shape. Ending abruptly at the upper thighs, some of these had a slight swing to it, while some were tight-fitting, closely outlining the curves. Both the swimsuits, however, completely covered the backside.

Modest yet discreetly provocative, the front of the one-piece swimsuit was an enticing sight to see. The backside, on the other hand, varied with choice and fashion. Some bathing suits revealed the back and covered the hips, whereas the others enjoyed a skimpy back by wrapping the straps of bra top around the neck and creating a gap up-till the hips. This one would provide ample skin to rub sunscreen on at the back.

Subtle variations came and went in the one-piece suits, including halter tops, and a triangular cut just below the chest. The one-piece bathing suits were always a lovely creation; teasing and modest at the same time. They accentuated the body revealingly and topped the charts for being virtuous and sufficient simultaneously. 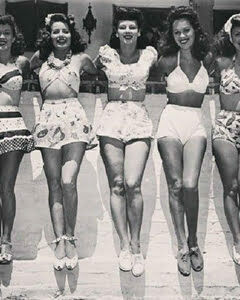 Two-piece swimsuits were more like the one-piece but cut adequately in half. These had a separate bra top with hugging cups and thin straps in a V-neck. It ended at the bust and revealed skin of the waist and abdomen. The second piece was the skirt, close-fitting with the same variation of either involving a ‘swing’ or closing in on the thighs like a mini-short.

Since the top of the two-piece swimsuits were worn separately, fashion designers had the liberty to experiment with them. Along with the halter top, the bandeau tops were another tempting addition to the 40s swimwear. The bandeau tops snuggly wrapped around the bosom, with or without shape of the cups, and had thin strings attached that tied at the neck. These were an appalling addition that apparently overstepped the modesty norms of the 1940s, but women found them actively favorable. 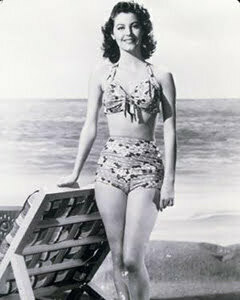 By 1946, the bikinis were introduced that further made the modesty-police gasp at its skimpiness. The bikinis of the 40s were tiny, wholly revealing the belly button, with mildly covering cups and hugging buttocks. The bikinis were banned for some time at the public beaches until people were able to digest the “too much skin” fashion of the swimwear.

In the late 1940s, the fashion of the bathing suits was fast losing the modesty that was contained in the earlier decade. Strapless tops were launched with the skirts at the same length or hitched higher. These were not as popular as in the 1950s, partly because only a few were brave enough to wear them in that decade.